This morning I spied my little resident chipmunk for the first time this year. At least I think it’s the same chipmunk I had so much fun watching last summer as he stuffed his cheeks full of the sunflower seeds the birds unwittingly tossed down to him from the birdfeeder. As chipmunks tend to be solitary creatures, except during mating season, it’s a fair assumption. Today he was perched on top of a miniature adirondack chair overturned in my garden, probably wondering what all that white stuff was on the ground. Poor guy. He probably didn’t expect to find snow and below normal temperatures when he finally emerged from his winter home. Time to put that Hawaiian shirt away and go back to sleep.

Chipmunks are actually ground-dwelling squirrels. They spend a good deal of their life in underground burrows. The Donald Trumps of chipmunkville can have quite extensive burrows with a storage chamber for the food gathered all summer, a sleeping room, a dump for those sunflower seed shells, and a latrine. Some even have several concealed chambers.

Unlike their tree dwelling cousins who do not hibernate, chipmunks can drop their body temperature to within a few degrees of the burrow to conserve energy. While we tend to associate hibernation with bears, chipmunks do not have the ability to store fat the way a bear does. A bear can go all winter without eating, but a chipmunk will raise its body temperature every few days, raid the pantry, use the latrine and then go back to sleep. 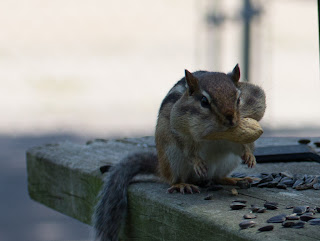 Thankfully, chipmunks are plentiful and only one species, the Palmer’s chipmunk which lives in a very small area of Nevada, is on the endangered species list. However, scientists have found that due to our changing climate, chipmunks living in areas where temperatures are getting warmer are less likely to hibernate during the coldest months. While chipmunks that hibernate enjoy a healthy survival rate of 87%, those that choose to remain active during the winter are almost certain to die before spring. This discover doesn't bode well for other hibernating species living in these warming climates.
Posted by Marilyn V. at Sunday, March 24, 2013 No comments:

It's snowing in Minnesota, but I've no reason to complain considering how the East Coast is getting buried in that cold white stuff. But being stuck inside the house always seems to be a good time to bake something. I turned to my favorite food blogs for a new recipe to try and was once more struck by the beautiful photos.There's nothing like a beautiful photograph to sell me on a recipe. But really, is anyone's kitchen that neat and organized? They all look like they came from a BHG photo shoot. This is what my counter looks like before I start baking, at the best of times: 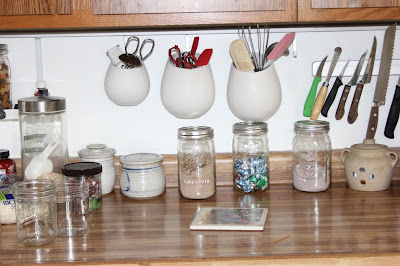 This is what it looks like when I'm baking. 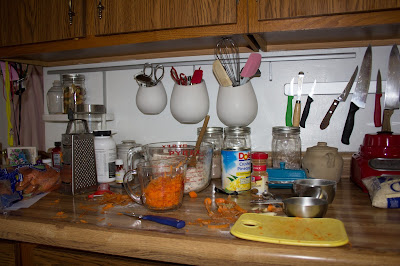 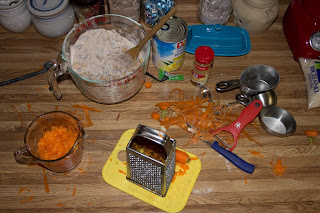 Martha Stewart, I'm not.
Posted by Marilyn Victor at Sunday, February 10, 2013 No comments:

The camera is fresh out of the box and I feel as if I have never held a camera in my hand before. It's familiar and yet very different. So I went outside to explore the milkweed, find some caterpillars and take some pictures. What I found instead was a small yellow/orange/brown butterfly that flittered from dandelion to dandelion.  I think it's a silver crescent, but I could be wrong on that. Still, I'm happy with the photos. And the extra 12 megapixels really makes a difference.  Although the neighbors probably thought I was crazy if they saw me jumping around the yard and crawling on the grass. 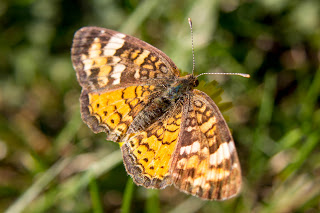 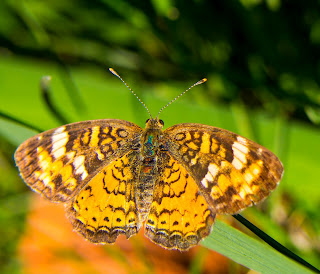 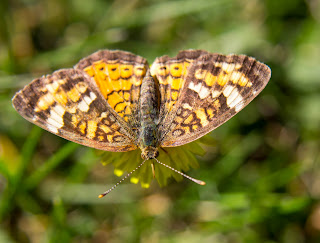 I still have a long way to go, but it's a good start.
Posted by Marilyn Victor at Saturday, June 09, 2012 No comments:

It's the Red One!

I did.  I bought it. And I absolutely love it.  It fits my camera and my 70-300mm lens, with room for another plus all the other junk I keep in my regular purse. 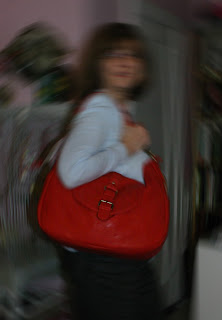 So now I have another decision:  new camera or new lens?  And I have to decide by Saturday because that's when the $100 rebate on the camera ends.  Or maybe there's a rebate on the lens....
Posted by Marilyn Victor at Tuesday, January 03, 2012 1 comment:

If I could make one New Year's resolution, it would be to learn how to make a quick decision.  I know.  Quick decisions usually get most people into trouble.  For me, it's the opposite.  Indecision is the bane of my existence. I have to weigh each decision. Look at the pros and cons.  Which is usually a good thing.  But I'm also a procrastinator -- yeah, New Year's resolution #2: Stop Procrastinating.

My latest roller coaster ride is over the purchase of a new camera bag. A couple of years ago I thought it would be really great to have a camera bag that didn't look like a camera bag.  Why couldn't a camera bag look like a purse?  Seems I wasn't the only woman out there with that thought and found several websites where enterprising women had designed gorgeous, functional bags at price tags that were way out of my league.  So I settled for a inexpensive Lowepro sling bag, an easy decision as I found it for cheap on eBay.  Getting a good deal often succeeds in breaking the ugly cycle of indecision for me.  It gets me a lot of stuff I could have lived without, but at least I didn't pay full price. 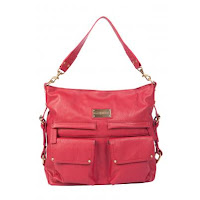 Then one day on a casual visit to National Camera my eyes landed on a Kelly Moore bag.  Now, for a girl who can use the same purse day in and day out for several years, it's saying a lot that I noticed these bags. Maybe it was the fake croc skin that drew me, but I immediately went home and turned to the internet. I knew I had found my bag -- or at least the maker of my bags. Now I had to decide which one of the many styles she offers was the right bag for me. The 2-Sues bag had my name written all over it. But I was in no hurry. This was a want, not a need. 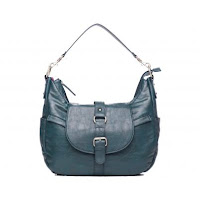 Another visit to National Camera for a new tripod (another struggle with indecisiveness) and they have more Kelly Moore bags. I immediately fall in love with the B-hobo bag.  I want one.  I have to have one.  And I have to have it by next Friday. But which color? There are at least 8 colors shown on line.  The store only has three of them: a black (I have way too much black), mustard (yuk) and red (will red go with any of my purple outfits?).  I think I want a teal.   So we drive to another store and they have one in teal.  Only it's the same color teal of my computer screen.  Not sure.  Maybe I should go with the red?  The next day I drive to another camera store which my GPS assures me is sitting in the middle of an intersection.  After driving around for thirty minutes I call, and find they're closed for the holidays.

I get advice. I stare at pictures. I really want hot pink, but that would have to be ordered off the internet and to get it by Friday I'd have to pay an extra $20 and......see what I mean?  If I had been able to make the decision when I first found these beautiful bags, I'd have exactly what I wanted and wouldn't be running around at the last minute trying to find what I wanted, knowing I'm going to have to settle in the end or just give it up. And this is not an isolated incident. This is how my brain works. I can hear my friends laughing; they've seen me in action.

So, New Years Resolution #1.  Learn to make a quick decision.

Maybe I'll just get the black one.
Posted by Marilyn Victor at Monday, January 02, 2012 3 comments:

Snake Jones is back!